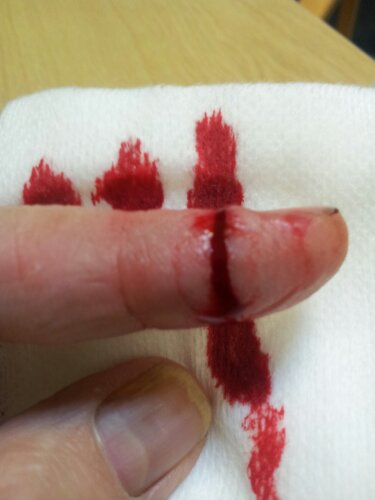 I was helping Streaters cut his holly bush into the shape of a rampant dachshund, when the hedge-trimmer slipped and nearly cut the tip of my finger off. Luckily I was wearing gloves. “Go over to Maddie’s field and stick your finger up a cow’s bum. That’s the best course of action and you won’t need any stitches,” Streaters said; and he should know because he was in the Royal Army Medical Corps.
“But that’s a bloody mile away” I said, “I’ll bleed to death before I get there!” Anyway, I trundled off to Maddie’s field with my hand wrapped in an old tea towel. On the way I met the farmer’s daughter, “Hi Ian, what’s wrong with your hand?” she said.
“Oh, I’ve just cut the tip of my finger helping Streaters cut his hedge. He told me to go over to Maddie’s field and stick it up a cow’s bum.”
“Aw, you don’t need to walk all the way over there, that’s nearly a mile away, you can stick it up my bum if you want.”
“Up your bum?”
“Yeah, it’s just as good and you won’t need any stitches.” And she took down her pants and bent over.

Anyway, Koo took me to Heatherwood Hospital minor injuries dept., where they filmed Carry On Matron way back in the 1970s, and of course lucky me, the beautiful Barbara Windsor did the needlework and mopped my brow. The bone is okay we think thank God.