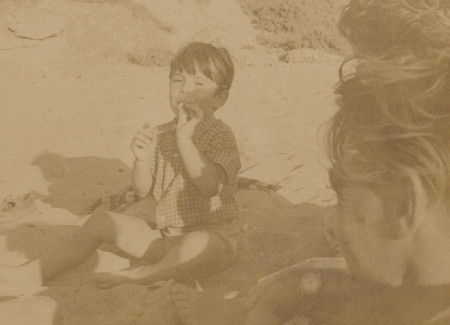 This is an old and very faded Black and White photograph taken (developed and enlarged) by my father, of me smoking – No Dates!

We were having a picnic at a place we called Buffalo Creek, in Tobruk, Libya. I had fallen into the sea from a cliff and my father had dragged me out, saving my two year old life. Then he tried to kill me by giving me a Capstan full strength cigarette, while they all looked on and took happy snaps of me smoking! Yeah, I was ill afterwards – Happy days.

Oh, and BTW, I hate smoking and I’m pleased they’ve banned it in public places! 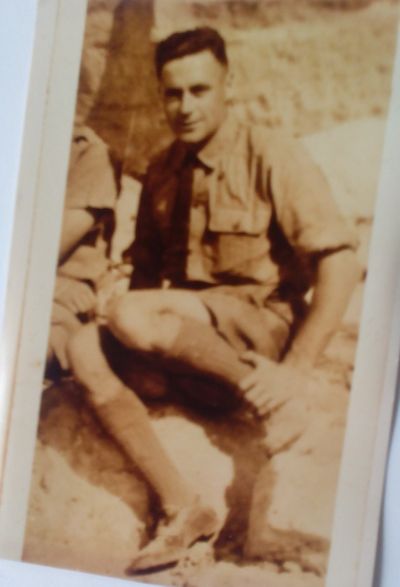 On this day when the world is remembering Hiroshima and commemorating the 70th anniversary of the first atomic bomb being dropped; I will be remembering my father’s brother (my uncle!) John Edward Robson, (Aircraftman 1st Class, 84 Squadron, Royal Air Force Volunteer Reserve) who died on 29th November 1943, aged 31. He was the son of James Byers Robson and Lily Agnes Robson; husband of Elsie Robson, of Ambleside, Westmorland and father to Kathleen.

John Edward Robson was a Japanese POW, he died on the ‘Hell Ship’ Suez Maru:

In 1943, the Japanese decided to ship the sick back to Java. A total of 640 men, including a number of Japanese sick patients, were taken on board the 4,645-ton passenger-cargo ship Suez Maru. In two holds, 422 sick British (including 221 RAF servicemen) and 127 sick Dutch prisoners, including up to twenty stretcher cases, were accommodated. The Japanese patients filled the other two holds.

Escorted by a minesweeper W-12, the Suez Maru set sail from Port Amboina but while entering the Java Sea and about 327 kilometres east of Surabaya, Java, Netherlands East Indies, the vessel was torpedoed by the American submarine USS Bonefish commanded by Cdr. Tom Hogan. The ship started to list as water poured into the holds drowning hundreds, many managed to escape the holds and swam away from the sinking ship. The Japanese mine sweeper W-12 picked up the Japanese survivors, leaving between 200 and 250 men in the sea. At 14.50, the minesweeper, W-12, under orders from Captain Kawano, opened fire, using a machine gun and rifles. Rafts and lifeboats were then rammed and sunk by the W-12. The firing did not cease till all the prisoners were killed, the minesweeper then picked up speed and sped off towards Batavia (Jakarta) at 16.30 hours.

Sixty-nine Japanese had died during the attack, 93 Japanese soldiers and 205 Japanese sick patients were rescued by the Japanese. Of the 547 British and Dutch prisoners, there is reported to be one survivor, a British soldier, Kenneth Thomas, who was picked up twenty-four hours later by the Australian minesweeper HMAS Ballarat, this has not been confirmed. Via Suez Maru Roll of Honour

Remembering John Edward Robson who is commemorated on Column 428 of the Singapore Memorial and the Atomic Bomb, Lest We Forget