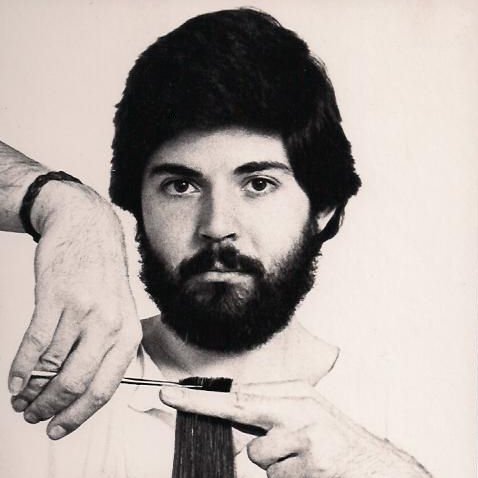 I had my hair cut last Saturday; seven months since my last do! However, I found to my horror that my hairdresser and old friend Richard, has turned all kinda ‏Lumbersexual!.

Actually, I’m really pleased to see the resurgence in barbering.

I wonder how my dear departed friend, Brian Streaters Streatfield, would’ve reacted to this trend, or maybe I should say, this fashionable look that was popular in the nineteenth century which has now turned into a Dutch sub-culture? BTW, if for some reason I was unable to cut Brian’s hair, in desperation he’d go to Stroud’s barber ‘Chopper Guy’ who’d cut it for £5 – Meaning: he charged sixty quid an hour to fuck up Brian’s hair!

And that hurts – Yes, there needed to be a rebirth of British Barbering after all the shit they’ve been shovelling.

So there they were, Richard and his hairdresser mate, standing there, looking like a cross between Ricki Hall and Will Young – It’s a look that I’m not too keen on – and we got talking about hairdressing ~ or maybe I should say: precisionist hairdressing versus barbering in 2015.

Richard’s mate did most of the talking – 21st century hairdressing techniques and equipment.

I have been in hairdressing since 1973 and my philosophy is very simple, true beauty comes from within. Perhaps that sounds clichéd, but it’s how I feel, you’ve just got to look around at the people you love. And even though I describe my style of hairdressing as flowing precisionist, I say, precision cutting isn’t unnatural or wooden, it never has been.

I come from the philosophy of haute couture: style, rigour and technical expertise. And that philosophy is at the heart of my flowing precisionist creations – and perhaps that sounds like bullshit, but, precisionist hairdressing isn’t all geometric bobs with asymmetric fringes!

The barbering revival has got to be great news for established barbers like Truefitt & Hill in London, and also for innovative barbershops like Schorem in Rotterdam, who pride themselves in being at the forefront of traditional haircuts and shaves – which is not a million miles away from where I’m coming from, if you get my drift!

Richard cut my hair brilliantly – as per usual ~ I wonder what we’ll talk about next time: ladies only salons? Sounds a bit retrogressive! Or maybe, why the hell are barbers obsessed with wall mounted stag heads?